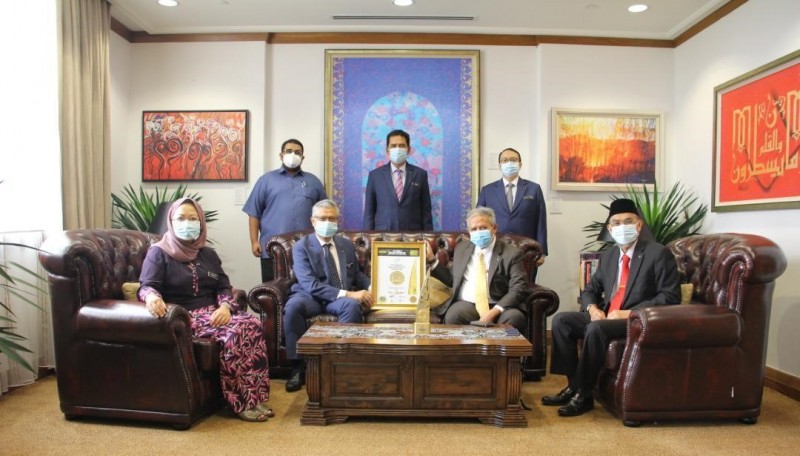 Caption: Islamic Tourism Centre (ITC)’s Board of Trustees celebrates ITC’s recent receipt of the Strategic Business Alliance Award from The BrandLaureate for its efforts in developing Islamic Tourism and the Muslim-Friendly Tourism and Hospitality concept

The agency, under the purview of the Ministry of Tourism, Arts and Culture (MOTAC), was established on 22 June 2009 to help build an enabling environment for Muslim-friendly tourism in Malaysia through education, research, training, capacity building, standards and certification, and branding.

YB Dato’ Sri Hajah Nancy Shukri, the Minister of Tourism, Arts and Culture Malaysia, gave her heartiest congratulations in a video message to ITC, crediting ITC for being “instrumental in creating Malaysia’s identity as a Muslim-friendly destination.”

She added: “Your invaluable programmes and initiatives in training, capacity building, standards and certification, and branding efforts have helped empower our tourism industry players to cater to the Muslim tourist market. There is certainly great potential in the Muslim tourist market and I encourage more industry players to partner with ITC to capitalise on this.”

YBhg Dato’ Dr. Noor Zari bin Hamat, the Secretary General of MOTAC, who is also ITC Chairman, also echoed the same sentiments, saying that there was much potential to be tapped within the Muslim tourist market. He added: “I urge industry players to tap into it with ITC’s assistance. I have every confidence that ITC will continue to grow and innovate with the continued support of industry players, its business partners, and media friends. As for the Ministry of Tourism, Arts and Culture of Malaysia, we look forward to continuing our support for ITC and the plans it has going forward.”

ITC Director-General, Dato’ Mohmed Razip Haji Hasan says: “Alhamdulillah, Islamic Tourism Centre set out to build Malaysia’s tourism industry in Islamic Tourism in 2009, and today, 12 years later, we see the fruits of our labour through the many accolades Malaysia has received for being the preferred Muslim-friendly tourist destination and the recognitions for ITC.”

He noted the challenges faced by the tourism industry during the pandemic, one that ITC overcame by pushing forward with “New thinking, New actions, New results” philosophy with a focus on cooperation with stakeholders, strengthening ties with industry, and strengthening the ITC branding at home and abroad.

Dato’ Dr. Mohmed Razip attributed ITC’s past achievements to the support received from the government and its industry partners. He said: “Our achievements thus far have been the result of the support of the Ministry of Tourism, Arts and Culture Malaysia (MOTAC), our partnerships with industry stakeholders, and the innovative ideas as a result of both. Of course, with the blessings of Allah, we are fortunate to be able to continue our efforts today, which inspires us to grow further in the coming years, insha Allah.”

“I also wish to express my appreciation to the staff and board of trustees, not forgetting my predecessors, for a job well done. The achievements that we see today are the results of the combined efforts of every individual.”

“The Board of Trustees, management, and staff of ITC look forward to contributing further to develop Islamic Touirsm and Muslim-friendly tourism further, and we seek the strong support from the Government, industry, partners, the media, and the public in order for ITC to fortify Malaysia’s position in an increasingly competitive landscape together.”

As part of its anniversary celebrations, ITC, via its social media platforms, has been highlighting its major achievements in recent years, such as:-

There has also been a social media outpouring of greetings and support from local and international industry players who share the joy of the agency’s 12th anniversary. “We thank all our industry partners and friends for their wishes and greetings. Let us continue to work together towards strengthening the Muslim-friendly tourism and hospitality concept through training, education, research, certifications, and capacity building,” Dato’ Dr. Mohmed Razip said.

Among those who shared their greetings for ITC’s 12th anniversary included:

HE Ravshan Usmanov, Ambassador of the Republic of Uzbekistan in Malaysia said: “We have been together in highlighting ziarah tourism…Uzbekistan Embassy in KL strongly and highly appreciates our longstanding and sincere friendship with ITC. I believe our joint efforts with ITC will continue to promote Malaysia and Uzbekistan at the forefront of Islamic Tourism.”

Professor Dr. Mohd Sallehuddin Mohd Zahari, Dean of Faculty of Hotel and Tourism Management, University Teknologi MARA said: “ITC has long been one of the recognised Islamic centres locally and internationally. I hope ITC will continue to play its role in promoting Islamic Tourism in this country and keep strengthening its collaboration with local and international partners.”

Associate Professor Dr. Hafiz Hanafiah, Deputy Dean Faculty Hotel and Tourism Management UiTM said: “Malaysia is seen as the leader in Muslim-Friendly Tourism and Hospitality concept and admired by various tourism destinations. This is a reflection of the success of ITC in promoting Islamic Tourism not only locally but internationally.”

Dr. Zalina Zakaria, Director, University of Malaya Halal Research Centre, Universiti Malaya said: “I’ve observed that ITC has achieved remarkable achievements throughout your 12 years of establishment. This is a testament of your ambition and great progression. I am sure that there are many more progress and achievement that you could achieve in the future.”

Hannah Pearson, Director of Pear Anderson, said: “ITC is an organisation I greatly admire being one of the few government led organisations who are actively advocating for the promotion of Muslim-friendly tourism and building a Muslim-friendly tourism infrastructure. They’ve undertaken lots of different innovative projects such as Muslim-Friendly Accommodation Recognition…They also conduct really valuable research into key new segments which need development as well as have a mission to educate stakeholders both international and domestically on Muslim-Friendly tourism requirements.”

Riyanto Sofyan, Chairman, Indonesia Halal Tourism Association said: “We are happy and proud to have done several collaborations with ITC along with Indonesia Tourism Ministry in the development of Muslim-Friendly Tourism in Indonesia, Malaysia and other parts of the world.”

M. Hamza Arslan, Country Manager, Turkish Airlines said: “Heartfelt congratulations to Islamic Tourism Centre on its 12th anniversary. Wishing you and ITC success for the years ahead. Hoping as Turkish Airlines we will make significant contributions into further growth of Islamic and Muslim-friendly Tourism in Malaysia as well as general tourism with our growing global network size & high aims for Malaysia.”

Ustaz Amri Abdullah, Analyst, MyHalal TV1 said: “I pray that all staff of ITC will be blessed with good health so as to administer ITC to the best of its abilities and with ease. It is my hope that elements of Halal tourism will be implemented in the concept of Mesra Muslim.”

Mohd Libra Lee Haniff, Director, Tourism Malaysia (Paris) said: “We look forward to supporting your efforts in making Malaysia a strong and attractive Muslim-friendly destination. There is much potential to be tapped here in the Europe market with its large base of Muslim population. Malaysia being a safe, Muslim-friendly destination with many unique cultural and heritage attractions, will certainly be a key draw for the Muslim tourist market in Europe. Looking forward to ITC's future successes!


Imtiaz Muqbil, Editor of Travel Impact Newswire said: “I think the opportunities are immense going forward to putting Islamic Tourism on the global map given the vast amount of economic impact that it has, as well as the broader social, cultural and geopolitical targets that it can meet. I think there is a lot of work still to be done and I wish Islamic Tourism Centre all the best in fulfilling its mandate and advancing all these activities that are becoming very important in this day and age.”

Dato’ Azlie Halim, Publisher/CEO Santai Travel said: “Happy 12th anniversary to Islamic Tourism Centre, and may ITC continue to be an institution that strengthens the tourism industry of Malaysia, especially in the development of Islamic Tourism.”

Juhan Kamaruddin, Editor of Gaya Travel magazine said: “Congratulations to ITC for its 12th anniversary and hope that the organisation will continue to be successful in assisting in the development of Islamic Tourism not only in Malaysia but also worldwide.”

The story of ITC

ITC was established on 22 June 2009 with the vision to position Malaysia as the top-of-mind Muslim-friendly destination and become a centre of excellence itself. ITC mapped out its direction with a comprehensive study in the early years to create awareness and tap into the lucrative Muslim tourist market.

The intervening years saw ITC play a key role in supporting and encouraging Malaysian tourism industry players to focus on this market. This was done mainly through research and training, capacity building, standards and certification, consultancy, as well as branding.

While the COVID-19 pandemic had slowed things down for the industry, ITC continued to make strides by actively participating in webinars as keynote speakers and panelists to discuss solutions beyond the pandemic. It also strengthened its Muslim-Friendly Accommodation Recognition (MFAR) initiative, the first of its kind worldwide, by piloting the programme with 44 local and international hotels and resorts based in Malaysia.

The third edition of the Islamic Tourism Journal was also published earlier this year, highlighting academic-driven studies of various aspects of Islamic Tourism (IT) and Muslim-friendly tourism and hospitality (MFTH), simultaneously enhancing the knowledge base of this specialised topic encompassing those niche segments of tourism.

ITC also took advantage of the pause in travel to provide training to tourism industry players to cope better during the pandemic and prepare for the eventual re-opening of borders. Topics such as life-saving skills for tour guides, importance of nutrition and physical fitness, and business coaching were offered.

It also advocated for the potential of Muslim-friendly travel by highlighting opportunities in developing packages around such unique Malaysian assets including heritage cuisines, Islamic education through the pondokstay concept, mosque tours and trails, and the like.

Despite being a small outfit within the larger MOTAC entity, ITC is widely recognised internationally, especially among the Organisation of Islamic Cooperation (OIC) member states. Through its partnership with the Statistical, Economic and Social Research and Training Centre for Islamic Countries (SESRIC) and the Standing Committee for Economic and Commercial Cooperation of the Organization of the Islamic Cooperation (COMCEC), both being key agencies within the OIC, ITC has delivered training programmes on MFTH development for its member states.

Today, Malaysia lays claim to a number of international tourism recognitions. In the State of the Global Islamic Economy (SGIE) Report 2020/21 by DinarStandard, Malaysia was placed atop the list of countries with regards to Muslim-friendly travel. In addition, Malaysia has been named the top Muslim-friendly travel destination by CrescentRating for nine years in a row since 2011.

Earlier this year, ITC received the “Strategic Business Alliance Award” from The BrandLaureate for its efforts in growing the MFTH concept through collaborations and branding.

Islamic Tourism Centre (ITC) is an entity under the Ministry of Tourism, Arts and Culture, Malaysia tasked to develop the Islamic tourism (IT) segment for Malaysia. It advocates for Muslim-friendly tourism (MFT) by offering research and market intelligence, training, industry development consultation, Muslim-friendly tourism and hospitality (MFTH) services standards and certification, and information exchange.

In 2021, ITC was named the recipient of the Strategic Business Alliance Award at The BrandLaureate World Halal Best Brand E-Branding Awards 2021. It is a recognition of ITC’s efforts and endeavours in formulating new strategies to meet the new normal of the business environment to ensure business continuity and sustainability, notwithstanding its role to develop and grow the IT segment in Malaysia.

In addition, Malaysia was named top country in the region in the MFT sector by the State of the Global Islamic Economy (SGIE) Report 2020/21.

Both recognitions are added motivation for ITC to continue to strengthen its efforts in being a prime mover and leading institution to ensure Malaysia is at the forefront of MFTH.